Pastor Duke's Blog: Time out.  I got asked whether I was going to disc... 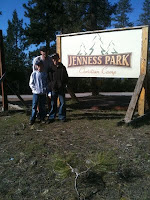 The weekend of April 29th 2011 was the annual Father and Son retreat at Jenness Park located in the beautiful Yosemite National Forest. The three-day retreat was focused on encouraging fathers and sons to walk in the Spirit of God. The theme came from the wonderful letter by the Apostle Paul to the first century followers of Jesus in Galatia.

I had the opportunity to take most of my sons along with me and as the Camp Pastor for the weekend, it was my responsibility to teach and preach 4 sessions during our three days. It is always a challenge to grab the attention of anyone especially men over a short amount of time over such a deep and often times misunderstood doctrine. However, this weekend, and in my observation it was certainly led by the Spirit of God.

I would like to share a few stories that came to me from disciples seeking to walk in the Spirit:

A young dad who is married for 5 years admitting he is sick and tired of lustfulness outside his marriage. The temptations were becoming difficult. He knew it was wrong in the marriage, however he came to realize how much God welcomes the death of his lust by way of the gospel of Christ, and the life of God’s love in his marriage. Freedom was what this man was able to receive.

Another father mentioned how hard it has been raising a rebellious teenager. He said he has “tried everything.” Yet, what he came to understand was how the gospel is longsuffering and patient. This called him to keep parenting his rebellious son by identifying with Jesus’ patience over his son.

Another father and son have both been hurt from church and enjoyed the weekend but didn’t find themselves in community in a local church back home. The Spirit of God led them to be under the conviction that they can’t live a disciple life in isolation from the local church. So they committed to look into being involved with a local Bible teaching, Christ honoring church. The Spirit confirmed there is joy they can have in community.

One more example of walking in the Spirit was a teenager who had no dad who came with him; but had a sponsor dad bring him along. He admitted his didn’t want to come, but by the end of the weekend he was being led to see that God is a forever Father, and a Father who will give him courage to live for Jesus among his non-Christian friends back home.

These are a few of many other stories I was blessed to hear, and be a part of while teaching/preaching at Jenness Park during the Father and Son retreat. As a closing story, God’s Sprit was also active in my relationship with my sons. We took some time to go over the fruits of the Spirit found in Galatians 5:22-23 and openly sought each other’s feedback on fruit that was lacking in our lives as followers of Jesus. It was indeed humbling to listen, and consider how we could be more Spirit led in living out the fruit of the Spirit in our walk with Jesus. “For freedom Christ has set us free…walk by the Spirit, and you will not gratify the desires of the flesh,” Galatians 5:1a & 16.

Posted by Eric Van Patten at 12:56 PM No comments: